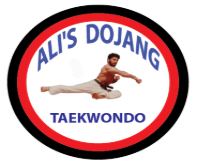 Ali’s Dojang was established in 1986 by Grandmaster Ali, Alipour, in Southwest Iran. Since then it has travelled to Belgium and currently is based in London, UK. Ali’s Dojang has competed in many national and international competitions, and past students now include Masters with multiple clubs across Iran, national and International Referees and people in positions of political power in Taekwondo.

Dojang is a term used in Korean martial arts, such as Taekwondo, Kuk Sool Won and Hapkido, that refers to a formal training hall. It is typically considered the formal gathering place for students of martial art to conduct training, examinations and other related encounters. So Ali’s Dojang translates into ‘Ali’s school of Taekwondo’.

The instructors of Ali’s Dojang have a combination of knowledge and experience inside the art of Taekwondo that provides you with the best training.

In addition, our instructors are qualified coaches and have been CRB checked by the British Taekwondo (BT).

At present, Iran and Korea are the top two countries and the world-famed for their excellence in Taekwondo. Grandmaster Alipour is a 7th Dan Black Belt. He was part of the Iranian National fight team. He has studied for over 33 years and has trained at Kyung Hee University in South Korea.

If you want personal 1-on-1 time with the instructors of Ali’s Dojang, you can contact them with the Contact tab at the top of this page.

With private tuition, you give yourself the opportunity to massively improve your training, by having it tailored to your specific wants and needs. This is especially good for those who have very precise goals in mind, and are driven to achieving them.

The location can be agreed upon and training will start as and when you’re ready, so you’re in control.

We use cookies to ensure that we give you the best experience on our website. Our Shopping Cart rely on cookies and with their help we can deliver complete shopping experience. By continuing using our website you agree that cookies can be used for an improved experience. Find out more here...